For some women, handbags are more than just a carrying pouch for their personal belongings. Some flaunt it as a means of self-expression, from being used to display their wealth or as a status symbol accessory in showcasing their exuding individuality. A study even showed that women use it instinctively to protect their romantic relationships.  prompting them to flash their pricey handbag whenever they feel threatened by another woman.

The more limited and unique the item is, the more costly it retails in the market. This is truer than ever for designer handbags, with luxury brands manufacturing only one to three items with a unique design. This results in highly priced handbags that only the top 1% can afford, with the item being decorated with diamonds and other kinds of jewelries, then later auctioned off for a higher price point.

Without further ado, here they are, ladies… The story behind Hermes Birkin bags is quite simple, with English actress Jane Birkin’s belongings crashing down after her straw bag failed her. The chief executive of Hermes, Jean-Louis Dumas, was with Birkin by chance during the incident, and he was inspired to create unique, fashionable, and sturdy handbags while having a convenient design to help solve women’s struggles. Since then, Hermes Birkins have become one of the most established and recognizable luxury brands sought after by millions of people.

This blue crocodile Hermes Birkin handbag managed to crack our top 10 list, fetching a whopping £125,000 during the first-ever Christie’s dedicated handbag sale in Mayfair, London. With this, it managed to smash European records for priciest handbag sold, Thousands of online bidders tried to get their hands on this Birkin handbag with white gold and 18-karat diamonds, with an anonymous buyer taking this prized possession. 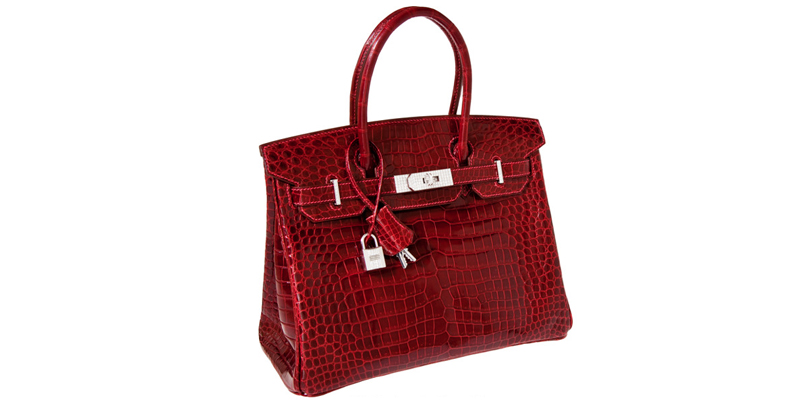 The official name of the handbag, Hermes Exceptional Collection Shiny Rouge H Porosus Crocodile 30 cm Birkin Bag with 18K White Gold & Diamond Hardware, fully explains why this handbag remains on the list of priciest handbags mankind has ever seen. This red-colored Birkin Bag broke records several years ago for being the most expensive handbag sold at public auction, with an anonymous collector winning the bidding at Heritage Auctions in Dallas, Texas. 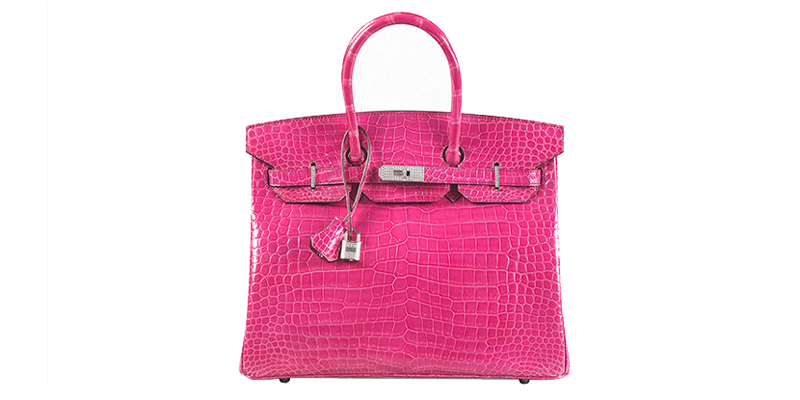 Hermes Birkin bags seem to be in a competition of its own, as it manages to beat its own records for priciest handbags sold. This Fuchsia-colored Hermes Birkin bag will sparkle on your eyes on first sight with its 18-carat white gold and diamonds. This shiny bag fetched a price of $1.72 million Hong Kong dollars during an auction of Christie’s in Hong Kong back in 2015. 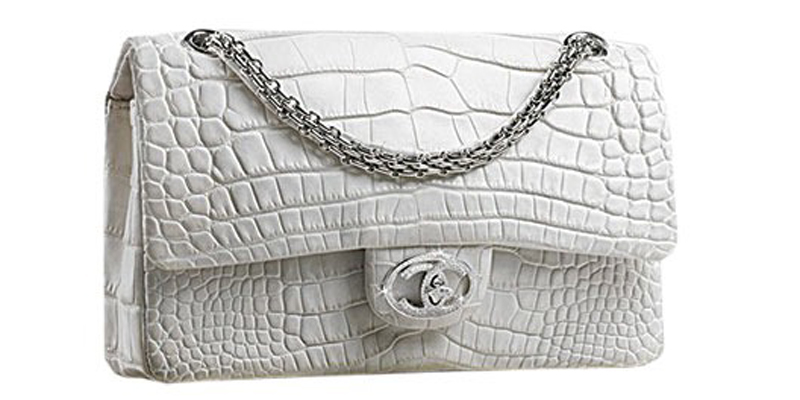 Chanel’s Diamond Forever handbag looks simple and elegant, with its iconic Chanel logos standing out. The Diamond Forever is made out of fine crocodile leather bejeweled with 334 diamonds that weighs 3.56 carats in white gold. The strap made out of an 18-karat gold chain can be detached. Materials aside, rarity is another factor for its high price, as only 13 of these items were created. 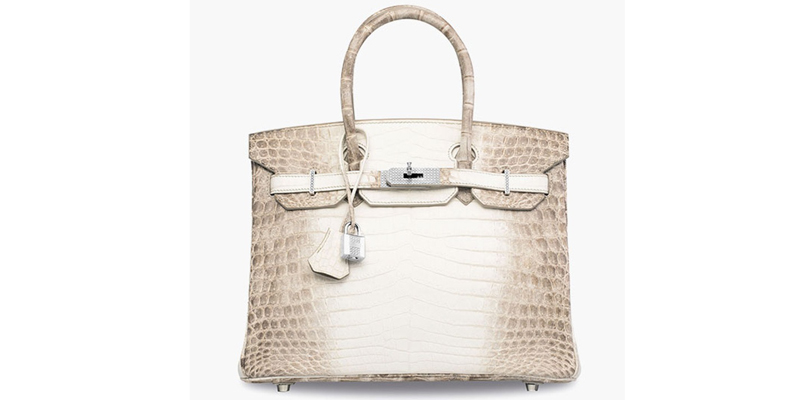 Himalaya Birkin bags are expensive for good reason. Not only is it made from Niloticus crocodiles, but it takes tons of hours for the dyeing process alone to lighten the hue of the material. The subtler the coloration, the more difficult it is to craft the bag.The Niloticus Crocodile Himalaya Birkin is designed to evoke images of the majestic Himalayan mountains, which has rich browns from its mountains and white as cloud snow-capped tops. Sprinkle in a few diamonds and you now have one of the most expensive bags the world has ever seen. 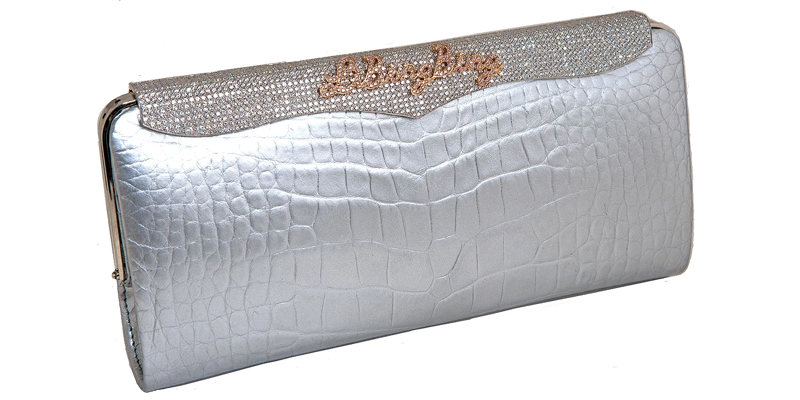 The fifth most expensive handbag is a fan-favorite among celebrities parading on the red carpet.  The Lana Marks’ Cleopatra Clutch costs from $100,000 to $400,000. The high price point can be attributed to its rarity, with each year only seeing one new Cleopatra Clutch, and each of them varies in color and design.

To date, Chinese actress and signer Li Bingbing owns the most expensive Cleopatra Clutch, with Lana Marks and stylists specially designing the American alligator leather, which is encrusted with 1,600 white diamonds that amount to a 40 karats, to match her gown. Pink diamonds and pink gold were also used to write down Li Bingbing’s name. 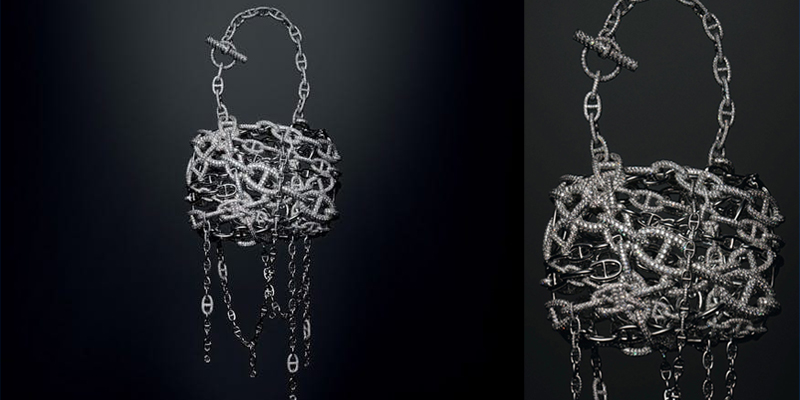 True to its name, the Hermes Chaine d’ Ancre Bag carries a intricate, prison-like design due to its anchor-shaped chain links which are encrusted with 1,160 pieces of diamonds. The high price can be attributed not only for its expensive materials, but also for being a Pierre Hardy-designed collectible as only three of these were created. 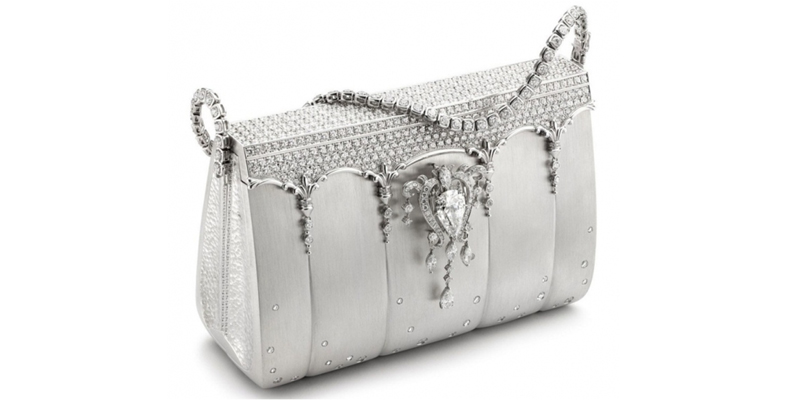 With this Birkin bag on hand, you’ll have a handbag with detachable parts that can be worn to accessorize yourself. Designed by Japanese designer Ginza Tanaka, this Hermes Birkin handbag was fashioned from platinum and carries 2,000 diamonds on its outer shell and features a pear-shaped 8-karat stone centerpiece that can be detached to wear as a brooch. If you forgot to bring a bracelet or necklace, simply detach the diamond sling from this Birkin bag and impress everyone with your exquisite jewelries. 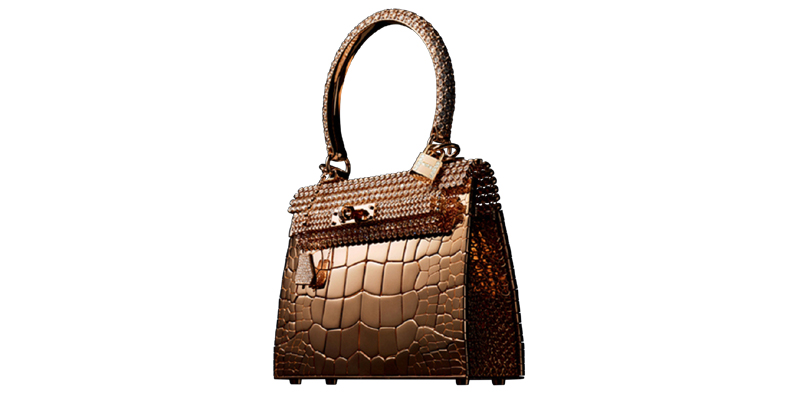 If you have this item, you no longer need to wear a bracelet to your parties. Crafted to resemble crocodile leather, this stunningly small and luxurious bag made out of solid rose gold was designed in collaboration by Hermes and jeweler Pierce Hardy. This handbag, which comes dotted with 1,160 diamonds, took two years to create and only 12 with three variants were ever created. Think twice if you’re planning to store items in this bag, as it’s only big enough to store a few dollars and credit cards. 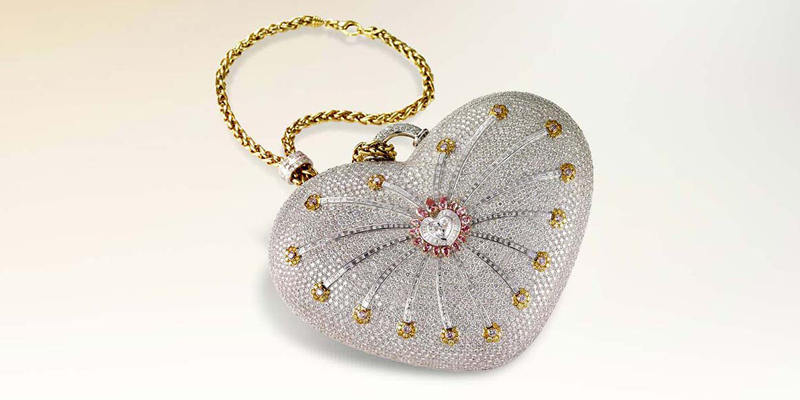 Mouawad 1001 Nights Diamond Purse is still the priciest handbag in the whole world, with its record remaining untouched in the Guiness Books of World Records since 2011. This is to be expected from the Emirati luxury goods company, which holds five Guinness World Records for some of the most expensive items in the world. This includes the Mouawad 1001 Nights Diamond Purse, a handcrafted 18-karat gold heart-shaped handbag, created by artisans who dedicated 8,800 hours-worth of labor of love. It comes adorned with a total of 4,517 diamonds, comprised of 105 yellow diamonds, 56 pink diamonds, and 4,356 colorless diamonds. This one-off luxury item was put for sale last year at Christie’s auction preview in Hong Kong.